The Power of Gender-Blind Casting

by Rebecca Patterson on November 15, 2015 in Musings, Rebecca's Musings 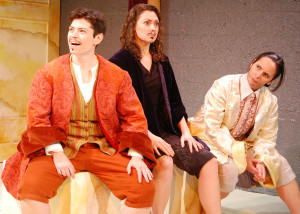 I’ve spent a fair chunk of my artistic life directing all-female classical productions and I’ve discovered a few things through the doing. As a theatre maker I’m hungry to work with the best actors possible, people who push me to do my best work. As a theatergoer I’m hungry to see female actors onstage doing adventurous, surprising and heroic things. Though this is happening more and more in contemporary theatre, we are still stuck in the past with our great old plays. What do we do about that? My answer is use the power of gender-blind casting.

The power of gender-blind casting is simple. It is the power of inclusion. When we include the majority of the population – women – as well as minorities in our casting decisions, we’re going to get the best actor in the role.

For women it means you will be asked for your full humanity and not just the safe small feminine part of yourselves.  You will be asked to be people of action, just like your brothers. It will be exciting, scary, exhilarating and well worth the effort.

And for those of you still asking, ‘why gender-blind casting?’ I’ll give you a simple answer. It’s 2015. Not 1915. Its time to stop being so old fashioned in our casting practices. It’s time to stretch ourselves. We will be the better for it.

507 comments for “The Power of Gender-Blind Casting”