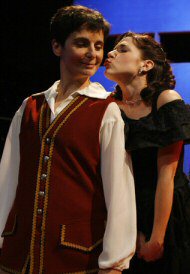 This gender-bending romp through Shakespeare’s classic is one of the best productions of the bard I’ve seen this side of the Atlantic. The Queen’s Company has a clear understanding of the fact that in his time, Shakespeare’s work was meant to be entertaining, the sort of thing the plebs would want to spend their hard-earned pennies attending. The company’s physicality and ability to let their status as a tight-knit ensemble shine through does a huge service to the text, and creates the sort of Shakespeare one wants to share with people who may not realize how much there is to appreciate in his work.

Director Rebecca Patterson has even managed to work song and dance into the play, in a manner so naturally aligned with the spirit of the production that one hardly bats an eyelash when the Feste (Natalie Lebert) sings Bob Dylan to usher in the prologue of Viola (Virginia Baeta) and Sebastian (Amy Driesler)’s shipwrecked split, or when Olivia (Carey Urban) pines for Cesario – Viola in disguise – by singing Annie Lennox. Okay, maybe one or two eyelashes batted at that one. But on the whole, where many productions’ attempts to bring song into their performance fail miserably – either coming across as stilted, or shoehorned in – Patterson’s fits with the spirit of Shakespeare’s common appeal and winds up enhancing, not distracting from, the production.

The actresses – well cast to a T, particularly Baeta, Urban and Frances Uku (as Count Orsino) – bring real humanity to their characters, rendering this Twelfth Night far more than simple comedy. They carry the weight and meaning of the text, and Patterson’s skilful (though sometimes obvious) updating of certain phrases gives the production a relevance and insightfulness (particularly in some of the double entendres, enhanced by physical gesture) which I have rarely seen outside of the Globe’s own productions.

As Malvolio, Aysan Celik brings the house down with her wide-eyed reading of Maria’s (Kari Washington) note, penned to deceive Malvolio into making a Feste of himself for Olivia’s affections. While Celik plays the scene with a large helping of ham (sometimes rivaled only by Lebert), the skillful delivery had much of the audience laughing. Not to be outdone, great depths of emotion were poured into speeches between Cesario/Viola and Orsino, and vice versa.

The set is simple – just a few panels set at odd angles and painted red or blue, and a bench with some flowers. Every element of the production stems from these basic building blocks, proving that simplicity breeds quality and there is no need for extravagance when the core of a production is so solid.

Throughout, Patterson’s distinctive directorial stamp was a reassuring hand guiding the ensemble through a complex and engaging emotional journey.

The most notable thing about Twelfth Night may be the one thing I haven’t mentioned, to this point. The Queen’s Company is made up entirely of women, all performing barefoot. Shakespeare was writing for men, and at times even mixed companies seem awkward (and I have to stress that I’m loathe to say that, but have found it true in the past). With The Queen’s Company, it’s clear old Bill has met his match; they transcend the label of being a good all women’s company, and earn the designation of an excellent Shakespearean one.