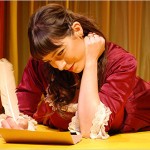 Those who would see The Wonder and focus on its flaws are the same type of killjoys who would eat ice cream then whine about the calories. While they’re certainly free to grumble, they’re also spoiling a treat.

The Wonder, written by Susanna Centlivre and first produced in 1714, is staged here by The Queen’s Company, an all-female classical troupe. All roles, men’s included, are played by women, and it’s a testament to the ensemble’s talents that the approach feels more like a smart move than an insincere stunt. Such casting adds zest to this already funny farce.

In the play Violante (Abbi Hawk) promises to hide her friend Isabella (Valerie Redd), who has fled from an arranged wedding and fallen instead for Colonel Britton (Maryam Benganga). In the course of their scheme Violante’s beau, Felix (Virginia Baeta), mistakenly suspects Violante of infidelity with Britton, and she is soon torn between keeping her man and betraying her friend. Bumbling lovers, sassy servants and frantic misunderstandings pop up everywhere, as the characters duck behind doors, overhear conversations and fall in and out of love.

On their own Ms. Hawk and Annie Paul, playing the servant Flora, are delightful actresses. Together, their skills are even more evident, as the two play off each other with ease. Ms. Benganga and Natalie Lebert (Britton’s footman, among other roles), are just as able. Ms. Lebert in particular tackles her numerous parts with bravado and supplies some of the most memorable moments in the madcap plot.

Other elements, however, can be inconsistent. While over all the cast has the crucial timing needed for a fast-paced comedy, the rhythm and tone is sometimes tripped up by a jumbled phrasing or a fumbled line. Rebecca Patterson’s direction too can be uneven, taking smart chances though missing opportunities for better use of the open, spare stage at the Kirk Theater.

Still, with so many belly laughs, those quibbles are easy to set aside. By employing a playful attitude and an occasional rock ’n’ roll beat The Wonder is a lively two and a half hours. Leave it to the killjoys (and the well-meaning critic) to nitpick. For everyone else, there’s a lot of fun to be had.