A Risqué Romp in Any Century 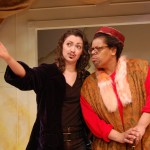 The Queen’s Company, the all-female downtown ensemble led by Rebecca Patterson, taps its inner swashbuckler (and farceur) with Sir Patient Fancy, a work by one of the rare female professional playwrights of the 17th century, Aphra Behn (1640-89). Little is known about Behn except that she was a spy for King Charles II at one point, and that her plays often possess a ribald flair. This one, presented at Wild Project in the East Village, certainly does.

What this production lacks in set design (the costumes, however, are fine) it makes up for in spirited performances, notably by Ms. Preston, who, wielding her rapier, makes a convincingly dashing rake, and by Ms. Abercrombie, whose Lady Fancy is a cartoon of salacious impulses. A scene in which Wittmore hides under the dress of Lady Fancy to avoid Sir Fancy whips up a delightful froth, as does a nighttime passage in which the men mistakenly pair off with the wrong women.

Less successful is the inclusion of one or two pop music tracks lip-synced by actors, a seeming bid to lend a contemporary tempo to the proceedings. It isn’t necessary; the cast members provide all the energy this show requires.