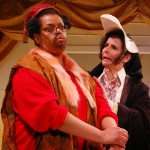 Because each show by the Queen’s Company improves on the last one, it’s no surprise that Sir Patient Fancy is remarkably fun. This all-female troupe revives English comedies from Shakespeare’s era and after, and they have a knack for comic drama. Last season they produced a playful, love-drunk take on As You Like It; this season sees the company reunite for a less familiar play.

Sir Patient Fancy is by Aphra Behn, England’s first professional female writer and an adventurer who dabbled in sex and espionage. Her plays and novels disclose a robust spirit, proving her to be a skilled dramatist of sturdy sexcapades that are still worth watching. Behn embraces decadence and dissembling, and her characters are motivated by desire—a surprise pleasure for audiences used to Shakespearean morality.

In Sir Patient Fancy, Behn links together a series of sex triangles: a trio of gallants compete with fops, fathers, and each other for the favors of pert, marriageable daughters and lusty wives. Although the scene is London, Behn depicts it as a generic urban playground with few concrete references to place or time. Queens’ designers follow those cues by emptying the stage of everything but a block for sitting and some damask for eavesdropping. The lighting plot is usually a bright wash of light, though it should do the work of making each scene’s setting and atmosphere more specific. The design’s lone baroque element is a company trademark: staging dumbshows to modern pop-rock anthems. Sir Patient’s curtain-raiser sets the tone by displaying the triangles of desire to No Doubt’s “Just a Girl”.

The minimalist design demands director Rebecca Patterson keep her actors moving and the comic tone bubbling. Behn’s dialogue lacks the subtext of Shakespeare, but the company turns her deficit to their advantage. They suggest quicksilver thinking by delivering flights of simile with wit and by expressing desire with ribald pleasure. The women-as-women look especially glad to play parts that match the male roles for substance and motivation. Sarah Joyce, as the witty ingénue (think Beatrice in Much Ado), tempers her character’s sensuality with a saucy skepticism. Tiffany Abercrombie, as an old hypochondriac’s second wife, delivers the evening’s best performance, her range of comedic expressions and vocal registers recalling Madeline Kahn. The women-as-men enjoy themselves too, of course, with the hypochondriac (Natalie Lebert) and the fop (Virginia Baeta) providing the most hilarious moments.

Actually, there’s not a bad performance among the company. Ascribe that fact mostly to the tightness of the troupe. Actors return to The Queen’s Company for show after show, forming a true company with the chemistry and esprit de corps that entails. They establish a continuity of style and an approach to playing that acts as a signature. All-male shows often get described as ‘testosterone-heavy’, shorthand for roughhousing and crotch-grabbing. The Queen’s Company does its share of suggestive leg-spreading in turn, but otherwise its common gender doesn’t produce an analogous “estrogen-driven” approach. Add the race-blind casting, and its productions seem emancipated. The company knows that love and lust don’t come from manhood or femininity, they come from human nature. This liberated spirit and humanist passion puffs Sir Patient Fancy into a giddy pleasure.