from Shakespeare for Everyone 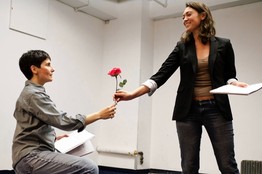 In The Queen’s Company’s As You Like It, cross-dressing goes even deeper than Shakespeare intended: the cast is entirely female. Actors are dressed to reflect their character’s gender, but the casting gives women roles they wouldn’t otherwise land. Director Rebecca Patterson, who founded The Queen’s Company in 2000 to present all-female classical theater, says women are especially good at evoking the nuances and intricacies of relationships and characters. “Male classical actors might be better at playing men. But women are better at playing human beings,“ said Ms. Patterson. “And Shakespeare is about human beings.”